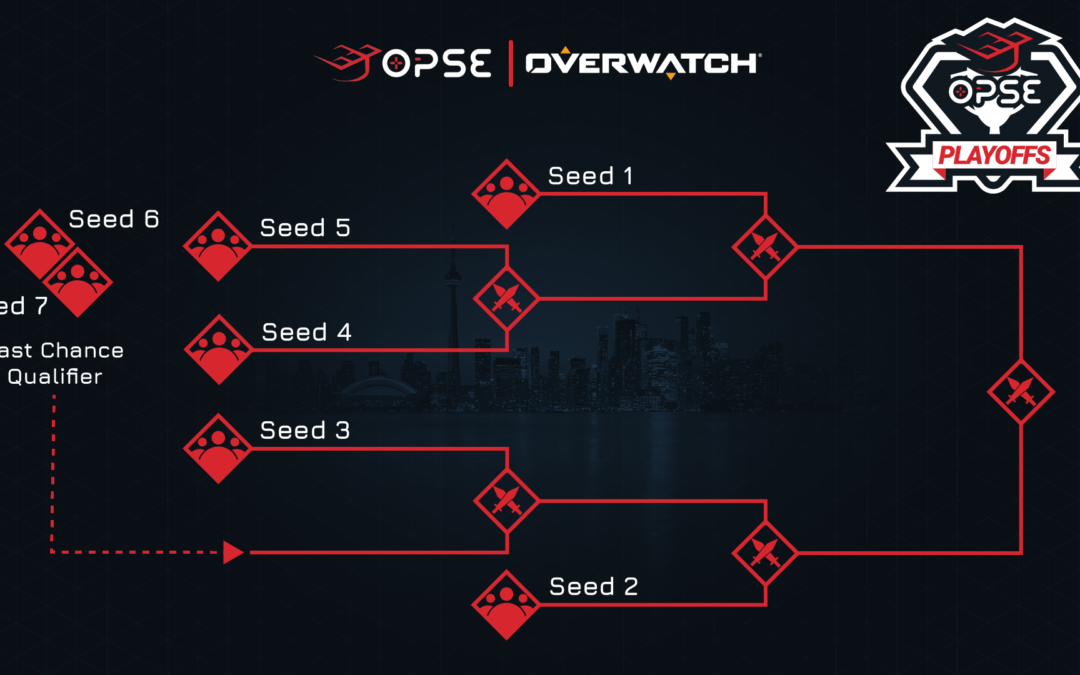 Welcome to our Mid-Season Power Rankings for Overwatch. This season, we have seen Carleton and Waterloo continue their dominance while new rookie teams have made a real splash in the standings. With only a few weeks until playoffs, anything can happen!

The Carleton Ravens continue to prove themselves as one of the top Overwatch teams in the province. Prior to OPSE, the Ravens have built up a number of accolades in Collegiate Overwatch including a trip to ESPN’s Collegiate Esports Championship (CEC) in Houston, Texas where they finished top 8 across North America. The core of the CEC team returns in OPSE with the tank lineup consisting of team captain, Jack “Jacklorf” Meireles and Sean “Kachow” Martin. The experienced tank roster is backed up by old and new teammates on the damage (DPS) lineup of Anjola “Diloxrocks” Onakoya and Jonathan “Jono5555” Soles. Afnan “Twitchy” Jadid, one of the DPS players from the CEC lineup, has transitioned to the support role and is joined by Ian “AMAG” Martin, the twin brother of Sean. The rivalry between the Ravens and the Waterloo Warriors is neck and neck with Carleton currently holding the Head-to-Head record this season! The Ravens have shown some vulnerability as they dropped their series to the up-and-coming Fanshawe Falcons. They will have to touch up and fix their weak points as the fight for the #1 seed will go to the very last match.

One of the top championship contending teams, the Waterloo Warriors have looked solid all season round dropping only 1 Match loss to the Carleton Ravens, their closest and long-time rival in the province. Bringing up the front line, returning member Weiyi “Bard” Wang pairs up with a new addition to the roster, Marcus “Tommathan” LeGrow as the tank players. Returning on the damage role, Jackson “Badges” Brajer looks to continue his dominant performance alongside the latest roster addition, Josh “GNOMER420” Vansteenkiste. Owen “Frags” Sluga and Ryan “Att” Kim, both returning players cap off the final 2 starting roster slots on the support role. The Warriors hold the most impressive map record after finishing the first half of the season with an overall map score of 11 wins and 3 losses. Be sure to catch their rematch against the Ravens on February 23rd as they are sure to be looking for revenge!

The Falcons have entered the OPSE season as one of the underdogs and they have proven themselves as a contender! With no prior history in other Collegiate Overwatch tournaments, the Falcons have fielded a roster that has dominated schools with more experienced teams. A big 2-1 upset win by this rookie roster over the Carleton Ravens has put the Falcons within reach of a top 2 seed. The flexibility of hero choices on the damage players of team captain, Matthew “Matt” DeWeerd and Trevor “Trev” Walker has brought Fanshawe up to 3rd place overall in the standings tied with the Queens Gaels. In their most recent game against Queen’s, the Gaels won with a 2-0 victory. The Falcons return to a critical match for as they will have to face off against Queen’s again on Jan 12.

The Queen’s Gaels have had an interesting first half of the season with many unexpected or off-meta hero choices by some of their players. Despite this, the Gaels maintain an impressive 4-2 record and sit in the top 4 in our Mid-Season Power Rankings. One of their most notable yet underestimated players, Connor “WILHELM” Wilhelm on the damage role, has been using Torbjörn as his standard hero pick. Teams have found it hard to determine weakpoints in the Queen’s roster with Connor’s unique style where he is able to cover the Gaels’ flanks and/or high ground locations. Going into the second half of the season, this roster must be ready with new strategies or team compositions as other teams have had time to adapt to the unique playstyle of the Gaels.

Entering the Collegiate Overwatch scene for the first time, the Condors fielded a solid roster. At times, key players such as Jonathan “JDogg” Land and Callyn “Scre4m” Martin have showed some potential as team carries. As the second half of the season begins, the Condors have a chance to avoid the Last Chance Qualifier if they can continue to work on the consistency of their team play and individual mechanics. The team has yet to peak and continues to improve with every match. Given it is the first time in Overwatch for the Conestoga Condors, this rookie roster has the potential to achieve higher placements in the future!

The York Lions have been one of the few Ontario schools who have experience in Collegiate Overwatch prior to OPSE. After finishing 8th in their Group in the Tespa OWCC 2019-2020 Season, the Lions have fielded a 9 player roster for the inaugural OPSE season. Notable players such as Matthew “Tsun” Ruffett and Samuel “Kleptse” Rigetti on damage have proven that the Lions have the talent; however, the team has yet to lockdown a consistent starting lineup. Frequent substitutions have caused the Lions to constantly adjust their playstyle based around the players they have fielded for that map. If the Lions want to secure the 5th seed for the playoffs, they must find their team and stick with it to produce consistent results and build team cohesion.

The Ryerson Rams entered the season looking as one of the possible contenders given their finish in the Top 32 overall in Tespa’s OWCC 2019-2020 season. However, only 1 player from that roster returned for the OPSE season, Christopher “Fraadchikin” Wong”. The remaining players on the roster are a mix of new additions and players promoted from their B team such as Christ “Toast” Jiang on tank, Benson “PlebW” Lam on damage. At the start of December, the Rams added two more players from their former Tespa rosters. We will need to wait and see if the additions of Antony “Hotdog” Xia and Ahmed “Becks” Begovic can keep the Rams’ playoff dreams alive.